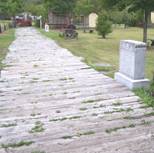 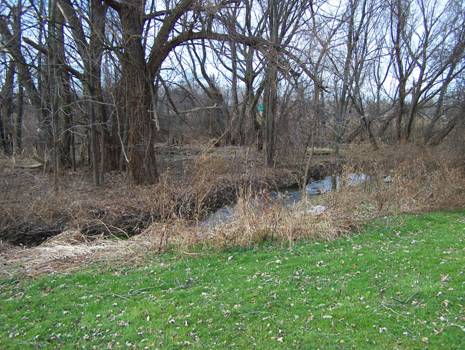 This is a view of Bear Trap Creek, looking northwest from the edge of the Roxboro Road Middle School grounds. As everything around it changed, the creek just rolled on.

Why Is It Called Mattydale?

The Story of the Double Underpass

The Arrival of Frank Matty

Origin of the Street Names

Old Settlers of the Town of Salina

The Roadhouses on the Old Plank Roads

The Secret of the Gold Coins - NEW

The same three girls search for buried treasure in 1964-1965 Mattydale.

A mystery where three girls search for ghosts in 1959-1960 Mattydale.

Growing Up On the Fields of Rose Lawn

The Short History of Mattydale - Duplessis

In 30 installments from the Syracuse Herald

The Building of the Legend - Frank Matty's Birthday Parties

The Plank Road and the Mattydale Triangle

"The Cornell Institute for Resource Information Sciences (IRIS) maintains a large and comprehensive collection of aerial photographs for New York State dating from 1936 through 1995. The photographs are primarily black and white direct contact prints, and in hard copy form they measure from 7” x 9” to 9” x 9” in size; scales vary." Mattydale photos are from 1938, 1951 and 1966.

Map of City of Syracuse and Suburbs, Onondaga Co., NY,

This version of the atlas has updated maps that reflect new

subdivisions up through at least 1928.

Map of City of Syracuse and Suburbs, Onondaga Co., NY,

This version of the atlas has the original 1924 maps.

They are also of a higher resolution.

The Bessie B. Riordan Apartments on E. Molloy Road were formerly known as the Bessie B. Riordan Elementary School. Before 1963 this was Mattydale School. Until the 1920s, the lot just west of this building was occupied by a wooden one-room school house (No. 3). The original structure was built in 1853. It burned down on January 24, 1902 and a similar one-room school house was rebuilt on the same site.